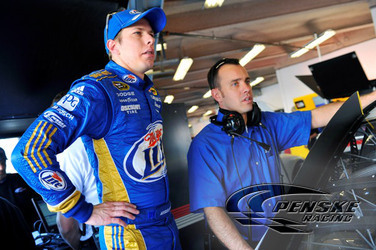 DAYTONA BEACH, Fla. (January 22, 2011) – With the 53rdDaytona 500 less than one month away, 34 NASCAR Cup Series teams descended on Daytona International Speedway (DIS) for Preseason Thunder, a three-day test at the 2.5-mile speed palace. For Brad Keselowski and the No. 2 Miller Lite Dodge team, it also provided another opportunity for the new driver/team combination to develop all-important chemistry before the biggest race of the season.

DIS received a new racing surface following the Coke Zero 400 last July, making this one of the biggest off-season tests in recent memory. Gone was the worn asphalt and bumps that eventually led to a pothole that delayed last year’s “Great American Race” by two hours. In its place is an ultra-smooth surface that should produce more of the exciting racing that has come to define DIS.

The focus of the No. 2 Miller Lite Dodge team for Day One of the test was on single-car, qualifying runs. Qualifying for the Daytona 500 will take place on Sunday, February 13, but it will lock in the top-two starting positions only. In the morning session, Keselowski posted a time of 49.204 seconds, or 182.912 miles per hour, which was the sixth-fastest time of the session. He followed that up with a time of 49.262 seconds, or 182.689 seconds, in the afternoon session.

Day Two began with early-morning rain showers moving through the area, which resulted in a delay in the action as the track drying process was underway. Teams were able to get back on the track at 1 pm and they immediately began to work on drafting practice, specifically the two-car draft that we have seen at the front of the field in recent restrictor-plate races. Keselowski, who owns two restrictor-plate wins in NASCAR competition, used a strong push from the No. 11 of Denny Hamlin to post the fourth-fastest time of the session at 45.873 seconds, or 196.194 miles per hour.

Drafting runs continued into Day Three, with Keselowski and teammate, Kurt Busch, working extensively as drafting partners. The two Dodges seemed to be perfect dancing partners as both drivers were affixed atop the scoring pylon by the end of the day, with Keselowski and the No. 2 Miller Lite Dodge posting the fastest time of 45.316 seconds, or 198.605 miles per hour. The Penske Racing Dodge Chargers were the only cars to break the 198 mile per hour mark. This gives both driver and team a lot of confidence as they prepare for the final few weeks prior to returning to Daytona for Speedweeks.

“It was a good test, we’re definitely moving in the right direction,” said Keselowski. “We’ve found a lot of speed since we were down here for the Goodyear tire test in December. We’ve also targeted some areas where we need to be better and I’m confident that my ‘Blue Deuce’ team will figure out how to improve in those areas.”

“The new surface is outstanding,” continued Keselowski. “The re-surfacing was something that I was a proponent of all along. We’re going to see a different Daytona 500 than we’ve probably ever seen. Cars are going to be bunched together, like we see at Talladega, and there will be a lot of lead changes.”