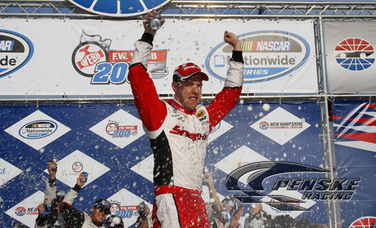 Brad Keselowski, driver of the No. 22 Snap-on Dodge Challenger in the NASCAR Nationwide Series,, scored his second win of the season in the F.W. Webb 200 at New Hampshire Motor Speedway (NHMS) on Saturday afternoon. Keselowski led a race-high 131 laps on the way to his 19th career NNS victory, which places him 15th on the NNS all-time wins list.

Keselowski began the 200-lap race from the pole position – his third-consecutive NNS pole award at NHMS – based on his lap of 29.067 seconds, or 131.035 miles per hour, around the one-mile oval. The time was good for a new NNS track record, the second time in three years that Keselowski has set a track record at NHMS. He briefly held the Cup Series track record based on his qualifying time during the fall 2010 event.

As the race began, Keselowski established the dominance of his Snap-on Dodge Challenger as he quickly raced out to a comfortable lead. He radioed to crew chief Jeremy Bullins that his car was slightly loose on corner entry and a little tight on corner exit. However, his forward bite was excellent and that is where he was able to put distance on the field. Keselowski led the first 38 laps of the event before the first caution of the day brought him down pit road for four tires, fuel and an air pressure adjustment. The Snap-on Dodge team pulled off a fast pit stop, but they were beaten off pit road by teams electing to take only two tires. As a result, Keselowski restarted the race from the fifth position at lap 43.

Once again, Keselowski began to show the strength of his Dodge as he began to make his way back toward the front of the field. He stated over the radio that he was still dealing with the same handling issues as in the first run and that he needed to be better just past the center of the corners. Following the second caution flag of the day, Bullins elected to go with a two-tire stop – along with fuel and an air pressure adjustment – to get his driver back at the front of the pack. With the benefit of having the No. 1 pit stall, Keselowski beat everyone off pit road and resumed the lead when the race resumed at lap 89.

With the race moving past the halfway point, Keselowski raced his Snap-on Dodge out to nearly a four-second lead. When discussing what to do on the final pit stop of the day, Keselowski stated his desire to do what was necessary to keep the essential “clean” air that comes with running at the front of the field. He visited pit road for the final time at lap 123, under the yellow flag, for another two-tire stop. He kept the lead when the race resumed at lap 129 with enough fuel to make it to the end of the race.

Following the final restart of the day at lap 150, Keselowski relinquished the lead to the No. 33 of Kevin Harvick after he had trouble getting up to speed. Harvick held the lead until lap 178 when he began to struggle with lapped traffic, allowing Keselowski to pass him with a strong move to the outside. Keselowski would not look back as he crossed the finish line to pick up the win.

Following Saturday’s result, Keselowski and the No. 22 team moved up one spot to eighth in the NNS owner point standings.