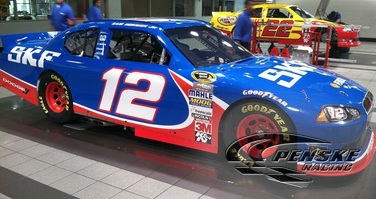 No. 12 SKF Dodge Team News and Notes
• Sam Hornish Jr., will debut the No. 12 SKF Dodge Charger and make his first start of the 2012 NASCAR Sprint Cup Series (NSCS) season Sunday afternoon in the STP 400 at Kansas Speedway (KS).
• Hornish’s return to KS marks his first time back to the track since 2010, when he competed in the NASCAR Sprint Cup Series.
• This will mark Hornish’s fourth NSCS start at KS. He has seven IICS career starts at the venue, which includes one victory (2006).
• From 2006 to present, Hornish has made a total of 109 NSCS starts. He has scored two top-five and eight top-10 finishes during that time.
• Hornish is also scheduled to drive the No. 12 SKF Dodge Charger at Talladega in the Good Sam Club 500 NSCS race in October.
• SKF is a leading global supplier of bearings, seals, mechatronics, lubrication systems and services which include technical support, maintenance and reliability services, engineering consulting and training. SKF is represented in more than 130 countries and has 15,000 distributor locations worldwide.
• This weekend the No. 12 SKF Dodge Charger will race with chassis No. 803.
• This race marks the first time that SKF will be a primary sponsor of the Penske Racing Dodge Charger in the Sprint Cup Series and this is its 15th year as a NSCS sponsor. SKF provides advanced technical support and product knowledge to the entire Penske Racing organization.
• The No. 12 SKF Dodge crew is comprised of the members of the Penske Racing No. 12 Alliance Truck Parts/Wurth Dodge Nationwide Series team, with a couple of personnel changes to the pit crew.
• No. 12 SKF Dodge mechanic Ryan Tschudi hails from nearby Creighton, MO.
• Hornish will return to NASCAR Nationwide Series (NNS) competition at next week’s NASCAR Nationwide Series 250 at Richmond International Raceway.
• Penske Racing has 354 all-time race victories with 101 stock car wins and 415 pole positions overall including 128 NASCAR poles.
• Follow Hornish at @PenskeRacing, @SamHornish, www.penskeracing.com, www.samhornish.com and the Penske Racing Facebook page – www.facebook.com/penskeracing.