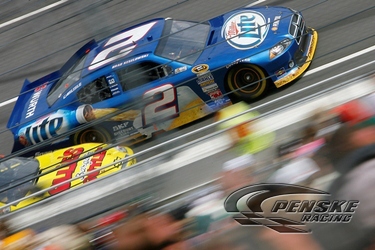 • This Week’s Charger… The No. 2 Miller Lite Dodge Charger team will race chassis PRS-820 during Saturday night’s Samsung Mobile 500 at Texas Motor Speedway (TMS). This is a new chassis to the No. 2 fleet.

• Going For Another 100 Wins… Keselowski’s win two weeks ago at Bristol Motor Speedway marked the 101st stock car victory for Penske Racing. The first win for the organization came in 1973 at Riverside International Raceway with driver Mark Donohue.

• It’s Miller Time… The featured tag line on the rear bumper of the No. 2 Miller Lite Dodge this weekend in Texas is “It’s Miller Time.” One of the most-recognized slogans in recent memory, “It’s Miller Time” can be found within many popular culture references. MillerCoors decided to bring back the slogan last month.

• The Rest is History… Penske Racing made its first Cup Series start at TMS during the track’s inaugural event in 1997. In 52 combined Cup Series starts at the venue, the organization has garnered two wins (Ryan Newman – 2003 and Kurt Busch – 2009), three poles and nine top-five finishes.

“Texas really is a unique racetrack and a unique layout. From above it looks like any normal 1.5-mile track, but the transitions into and off of the corners are quite a bit different than Charlotte, Las Vegas or any of the other mile-and-a-halfs. There is a lot of banking into the corners, which means you can carry a lot of speed in and to the center of the turns, but you lose that speed on exit as the track flattens out. It’s difficult because normally you can carry the same amount of grip and speed on both corner entry and corner exit. You have to adjust accordingly and sometimes that’s hard to do at 180 miles per hour. It’s easy to find yourself in trouble, especially off of Turn 2.”

Brad Keselowski assesses his start to the 2012 season

“We’ve definitely had a lot of speed in our cars to start the season. That’s a testament to the hard work put in by everyone at Penske Racing in the off-season. We’ve legitimately had top-five or top-10 cars at every track this year. Whether it’s me speeding on pit road or having fuel injection issues, we need to figure out how to finish where we deserve to finish. Once we do that I think you’ll really see this team take off. We have more speed coming in our cars as we continue to make them better. I’m excited about what we can become.”

“Texas is a place with a lot of unique characteristics. The track has bumps in Turn 2 and has aged to where grip becomes a big factor late into a run. We want to set the car up to run the bottom of the track, but yet, still have the flexibility to run various lines through the corners. This is a new car for us this weekend. We’ve rolled out several new cars to start the season and have been very happy with their performance. Brad has shown that he knows how to get around these 1.5-mile tracks and I think we’ll have a solid weekend at Texas.”

Allmendinger Hoping To Continue To Show Strength at Texas