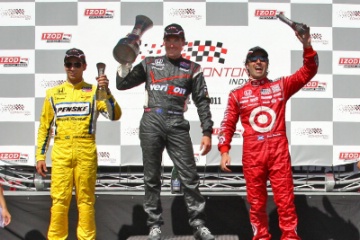 Power and Castroneves Finish 1-2 at Edmonton

Will Power edged teammate Helio Castroneves on Sunday to win the Edmonton Indy in what proved to be a very productive day at the City Centre Airport street circuit for Team Penske.

Power’s No. 12 Verizon Team Penske Dallara/Honda beat Castroneves’ No. 3 Penske Truck Rental car to the finish line by just .8089 of a second for the team’s first 1-2 finish of 2011 and Power’s fourth victory of the season. Team Penske’s Ryan Briscoe, who was headed for a top-five result before he was forced to pit for fuel on the final lap, finished 10th in the No. 6 Penske Truck Rental Dallara/Honda. The result completed a strong points day for the team.

With the win, Power closed to within 38 points of leader Dario Franchitti in the IZOD IndyCar Series championship standings. Franchitti finished third on Sunday. All three Team Penske drivers are now in the top-10 in the championship as Briscoe remained sixth and Castroneves moved up three spots to ninth in the standings with the Edmonton effort.

The victory marked the 157th all-time Indy car win for Team Penske and it was the 33rd 1-2 finish in the storied history of open-wheel racing’s most successful team. 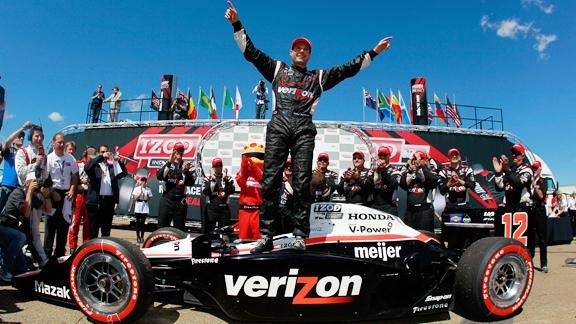 In the Firestone Fast Six final qualifying round, Power recorded a lap of 1:18.5674 in the No. 12 Verizon Team Penske Dallara/Honda. His lap around the newly-designed 13-turn, 2.25-mile circuit at City Centre Airport gave Power his sixth front-row starting position in 11 events in the 2011 IZOD IndyCar Series season. Unfortunately, Power saw his impressive streak of eight straight poles won on road or street course circuits come to an end on Saturday. Power enters Sunday’s race trailing Dario Franchitti by 55 points in the series championship standings.

Meanwhile, Briscoe locked down the sixth starting spot by posting a lap of 1:19.0267 in the No. 6 Penske Truck Rental car. The result marked Briscoe’s fourth top-six qualifying performance this season.

Castroneves was clocked at 1:18.7669 during the second round of qualifying in the No. 3 Penske Truck Rental Dallara/Honda and will start ninth. The three-time Indy 500 champion has earned top-10 starting spots in all four of his career races at Edmonton.