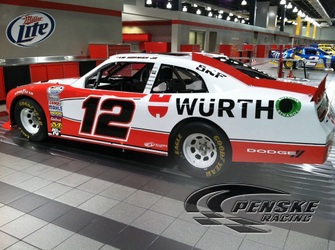 Sam Hornish Jr., driver of the No. 12 Wurth Dodge Challenger, will make his sixth appearance at the 2012 NASCAR Nationsiwde Series (NNS) Friday evening in the O’Reily Auto Parts 300 at Texas Motor Speedway (TMS). WURTH will be presented as the primary sponsor of the No. 12 Penske Racing Dodge in the competition. In addiction to the NNS competition, WURTH will be a primary sponsor in a total of seven events this year. The Wurth Companies of North America provide customers with everything they need to succeed in the Automotive, Industrial and Woodworking Industries.

• From 2006 to present, Hornish has made a total of 38 NNS starts. He has scored one victory, two top-five and eight top-10 finishes and has also claimed five top-five and 12 top-10 starting positions during that time.

• After five races Hornish and the WURTH Dodge team are fifth in the NNS Championship point standings.

• This weekend the No. 12 WURTH Dodge Challenger will race with chassis No. 223 which is brand new to the Penske Racing stable.