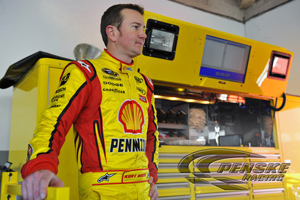 DAYTONA BEACH, Fla. – Shell-Pennzoil Dodge driver Kurt Busch won Saturday night’s Shootout at Daytona International Speedway to score his first-ever career restrictor-plate victory. In what has become commonplace with the seasoned veteran and 2004 NASCAR champ, Busch was quick to heap praise on almost everyone but himself.

“It was an awesome night for our Shell-Pennzoil Dodge Team and what a great thrill it is to win the first time out with our new colors,” Busch said. “We finally came home the winner in one of these plate races and I certainly have to thank Steve Addington and my Penske Racing Team for giving me a great race car. All the hard work they have put in over the last several months certainly paid huge dividends here tonight.”

“But, I have to really thank quite a few of the other competitors and credit them for their help. Jamie McMurray was the man tonight. He drafted with us all during the final segment of the race. He stayed true and I will always be appreciative of that. We had hoped to work with the 78 car (Regan Smith), but when he got shuffled out so early in the race, we had to look for someone else to run with. Mark Martin came to the rescue. We finished the first segment working so well together that during the break I sprinted down to his pits to thank him and get his commitment to work with us again during the final 50 laps.

“We started out running with Mark, but when we got split up we fell to the rear. Jamie and I were both looking for partners and when we hooked up, that was just what we needed to dig our way back up to the front. We hadn’t drafted together in practice, but we’ve had a great history of working well with each other. It certainly was the case in this race. I can’t thank him enough for doing that tonight.

“But, I also need to thank my Penske Racing teammate, Brad Keselowski,” Busch said. “No, he wasn’t in tonight’s race, but he really is due an ‘atta boy’ for helping us win. This is a whole new breed of competition that we witnessed out there tonight. It’s partner racing because of the two-car drafts you always have to be in. When we tested down here last month, it was Brad and I – the 2 car and the 22 car – who stayed down here for all three days trying to figure this new deal out. He came into Victory Lane tonight to congratulate us and I told him to just wait till next week; that it’ll be the ‘double-deuce’ and the ‘deuce’ out there trying to accomplish the same thing.”

Busch started 17th Saturday night. His plans on drafting with Smith fell by the wayside after only three laps. Busch floundered for two laps before hooking up with Martin. They drafted all the way up to run as the second “twosome” on Lap 15, but when they tried to switch positions, they separated and fell back. When they finally regrouped to run together again, the laps had wound down, with Busch running 15th and Martin 16th at the Lap 25 break. Busch sprinted a quarter of the way down pit road with Addington in tow in order to iron out a pact with Martin and the No. 5 Hendrick Team.

Busch and Martin ran well together during the early part of the final 50-lap segment, but they were split seven laps into the session. Martin wound up hooking up with Kyle Busch. Bump-drafting too deep into Turn 1 saw that duo crash out of the race on Lap 35. Shortly after the restart, Busch has drifted toward the back of the field. McMurray had lost his Ganassi teammate Juan Pablo Montoya and needed another driver to run with. When they locked together, it was a powerful combination that moved toward the front immediately. The tandem shot up through the pack and had Busch at the point for the first time of the race on Lap 46.

At the end, it turned into a four-pack run to the finish, with Ryan Newman and Denny Hamlin hooked up and racing with the Busch/McMurray duo. Hamlin got under Newman coming down to the line, with Busch on the outside. What would have been a photo finish between the No. 22 car and the No. 11 car was nullified when Hamlin passed below the yellow line and was penalized to the end of the lead lap cars.

“I wanted to give those guys a push hard getting into Turn 1 and I never got to them,” Busch said of the final nail-biting circuit around this 2.5-mile track. “Then my game plan changed to take whatever I could get. I knew the 11 was going to split away from the 39. I was hoping he would do it soon enough. It worked out in our favor at the end because McMurray stayed with us. For Shell and Pennzoil to believe in Penske and me; this is unbelievable to deliver them a victory in this 22 car.”

“This is a special day,” Busch told the media representatives gathered in the infield media center after the race. “I’ve tried very hard over the last 11 years to break through on a restrictor-plate race. To pull into victory lane at Daytona, I knew that this was a special moment and I sucked it all in. You never know when that chance will be again. I’ve always respected this race track. I’ve always thought of the times that I’ve finished second here, not just in Cup cars, but in the Truck series and IROC. I can’t get mad. I can’t get discouraged. I know that one day it will come back for me. And with the fresh pavement and a new outlook on what this draft was going to be about, basically this is the old-school-style racing with slingshot with two cars tied up together. That’s what it reminded me of. I had flashbacks of slingshots, but you have to have the guy behind you. It’s an unbelievable experience to win here at Daytona. To win a restrictor-plate race at Daytona after years of trying – it’s not a points race – but it’s a very special race and heck, we knocked out the All-Star race last year in Charlotte and we got the Shootout tonight. Steve and I are doing pretty good at knocking out big events together.”

Next up on the 2011 Speed Weeks schedule is Sunday’s qualifying session for next weekend’s Daytona 500. Set to begin at 1:10 p.m., Busch is scheduled out 32nd in the qualifying order. The action will feature live coverage by FOX-TV and MRN Radio (live streaming on NASCAR.com).