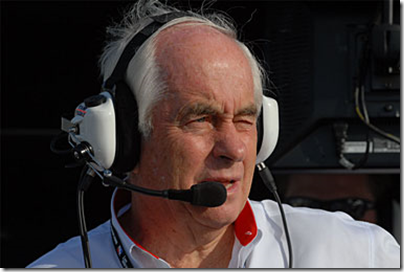 Think of the Indianapolis 500 and there are many worthy but only a few names uttered as truly synonymous with the great race. Names such as Hulman, Foyt and “Gasoline Alley” sum up so many great years of history at the iconic circuit. Another name mentioned in the same breath, and rightly so, would be the name of Roger Penske.

Roger Penske first started buying and selling race cars in 1958 at age 21, and even competed in two Formula 1 races, however it was domestic racing that Roger was focused on, forming Penske Racing in 1965. Roger never personally competed in the Indy 500, as he gave away a chance to do so to an unknown rookie at the time by the name of Mario Andretti.

Success as a team owner came relatively quickly, as Team Penske won its 4th attempt at the Indy 500 in its 7th year of existence, with Mark Donohue behind the wheel in 1972. The 1980’s and early 90’s though were where Team Penske really came into their own. With 8 Indy 500 wins between 1981 and 1994, it was the all-too-familiar sight of orange and white at the front most of the time.

Since then, Team Penske have been regular frontrunners and have seen plenty of famous names pass through its doors, such as all three Unsers, Rick Mears and Emerson Fittipaldi, just to name a few. Nowadays, Penske regularly find themselves fighting with Ganassi Racing, but are usually in contention when it counts. Roger Penske wouldn’t have it any other way.

Of the many names that are synonymous with success in both IndyCar Racing and NASCAR, the name Roger Penske is possibly the most dominant. As a driver himself, Penske was successful in the Sports Car Club of America (Driver of the Year in 1961) and competed in two Formula One Grand Prix races as well as NASCAR. The fact that Penske never opted to compete in the Indianapolis 500 is interesting, considering he has become the most successful car owner in the IndyCar Series and at Indianapolis Motor Speedway.

Penske was offered a rookie test at Indy in the 1960s, but turned it down for business reasons. His spot was taken by a driver, however, who went on to have a long career in open-wheel racing as well as notorious bad luck at the Indy 500: Mario Andretti. As a team owner, Penske’s first foray into IndyCar Racing came in 1968 with driver Mark Donahue; the following year they competed in their first Indy 500.

It didn’t take long for Penske Racing to get off the ground and become a force: in 1972, Penske and Donahue won their first Indianapolis 500. As of 2010, Penske Racing has won 15 Indy 500 titles as well as 15 pole positions for the historic race. In IndyCar Racing overall, the team has 155 wins (USAC, CART and IRL combined) and 12 championships.

Rick Mears was by far the most dominant driver for Penske Racing, earning four of those 15 Indy 500 wins (1979, 1984, 1988 and 1991), as well as six of the 15 poles and three IndyCar championships. Hot on his heels though is current Penske ace Helio Castroneves. The Brazilian driver currently has three Indy 500 victories along with four poles in the race; he has yet to win a championship, however.

Penske hasn’t limited his success to IndyCar, though. The team made its NASCAR debut in 1972, again with Donahue behind the wheel, but immediate success was harder to come by; he walked away from NASCAR in 1977. In 1991, however, Penske came back to NASCAR with driver Rusty Wallace; the familiar #2 Miller-sponsored car has been a mainstay in NASCAR’s Cup Series since then, with Kurt Busch eventually replacing Wallace before Brad Keselowski took over the ride in 2011. Keselowski is the reigning NASCAR Nationwide Series champion, earning Penske Racing its first NASCAR title. Keselowski and Busch make up the current Cup Series roster for Penske Racing – driving the only Dodges full-time on the circuit – while Keselowski and former Indy 500 winner Sam Hornish Jr. drive for Penske in the Nationwide Series.