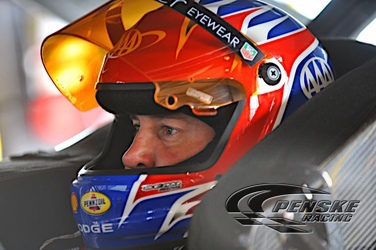 AAA Dodge driver Kurt Busch and his Steve Addington-led “Double-Deuce” team will be racing their “PRS-754” Dodge Charger in this weekend’s STP 400 action at the Kansas Speedway. “We’re continuing to make progress with our new cars and this is another one of them,” offered crew chief Addington. “That was a brand new car that we had for the 600 at Charlotte last weekend and this is another new chassis we have for Kansas. We’re determined to get everything turned around and we all know that we can’t do that overnight. The biggest thing is that we have to exercise patience during the process and I think we saw a lot of that with the Penske Teams last weekend at Charlotte.”
Kurt Busch “Quick-Stats/Loop Data” for Kansas Speedway (courtesy of NASCAR PR):

KANSAS CITY, Kans. (May 31, 2011) – No. 22 AAA Dodge driver Kurt Busch heads into this weekend’s STP 400 at Kansas Speedway looking to post his best-ever finish on the 1.5-mile tri-oval track. One thing for sure is that the 2004 NASCAR Sprint Cup Champ certainly realizes the importance of the Kansas track on the schedule, especially since a second race was added there for the 2011 season.

“Yeah, it’d be easy to just look at the schedule now and say, ‘Hey, they added another race at Kansas and that’s twice the significance as far as the big picture goes,'” said Busch, who came from behind to post a fourth-place finish in Sunday’s Coca-Cola 600 at Charlotte. “But the second race at Kansas is much more than just adding a second race. You’d be extremely accurate to label it as doubly important…plus. It’s definitely more than just twice the amount of points on the line.

“The way that our season is laid out now, both of the Kansas races come at critical times on the schedule,” said Busch, who after posting his best finish of the season at Charlotte is back up to sixth in the points standings. “The race there this weekend comes at a point where all the teams are jockeying for all they can get in their focus to make the Chase this year. A win there would go a long way in getting in by grabbing one of the final two spots available for race winners. A solid top-five finish there will help in the effort to get in by being one of the top-10 points guys when we get back to Richmond in September.

“Looking on down the road, when we head back to Kansas for the fall race, it’ll be the fourth race of the Chase,” said Busch, currently 15 points out of fifth. “By then everyone one of the Chase guys will be scratching and clawing for everything they can get. There’s a lot that will happen between this weekend’s Kansas race (the 13th race of 2011) and the October battle (30th of the 36), but it’s easy to see how important both races are.

“With the testing rules that are in place in our sport now where we can’t test at an active track where we race, that only adds to the significance. We’ve added Kentucky to the schedule and that removed a major intermediate track from the possible test schedule. With all the mile-and-a-half tracks that we have on the schedule, it can make or break you with your performances there.

“So where would you go to test for Kansas? The way our schedule is, you can actually look at the first Kansas race as your testing for the second race there. I can guarantee you that our Penske Racing ‘Double-Deuce’ Team will be taking as many notes as we can this weekend at Kansas.

“Even though there is the possibility of the weather and track conditions being totally different from the first race to the second, you still have to come in there with that being part of your game plan. Any track time you can get these days is so important. When we get back to Kansas in October, Dave Winston (team engineer) and all of our guys will be pulling out their notes and data from this weekend’s race and last fall’s race there.”

In 10 career starts at Kansas, Busch is still looking for his first win and first top-five finish there. He has two top-10 finishes with his best tally to date being a sixth-place finish during his successful run to the 2004 series points title. Entering this weekend, Busch has a 20.4 average start at Kansas and a 19.0 average finish. He has led a total of 81 laps there, running at the finish in nine of the races and finishing on the lead lap in six of them.

“I don’t know what it is about the Kansas track,” said Busch. “The year that I won the championship, I finished sixth and that’s been the highlight so far. It’s a flat mile-and-a-half that reminds me of Las Vegas when it was built and flat. It’s just a tough combination. If you’re just a tick off, you feel like you play catch-up most of the weekend and if you unload fast, you’re tough to chase down.”

“As hard as it may be to understand with what we’ve fought most of the time this year, we just fought a really loose car for most of that race,” said Busch. “I had a handful of steering wheel most of the day and we did all we could to keep up with the leaders. We made all kinds of adjustments during the race; with air pressures, wedge and even a right-rear spring rubber. We stayed inside the top 10 for most of the race, but just couldn’t gain the track position we needed late. Once the track rubbered-in, our car got tight in the middle of the corners and was tough to drive.”

Busch and his Steve Addington-led “Double-Deuce” Dodge Team will be bringing out another brand new Charger this weekend as they debut their “PRS-754” chassis. “It’s a continuous effort to bring out stronger race cars,” said crew chief Addington. “We are seeing our cars getting stouter, but like I told them last weekend at Charlotte, it’s not going to be an overnight deal to get back up front. We are confident we are headed in the right direction and we’ll get there.”

“We’re super excited to be running the AAA colors on our Penske Racing Dodge this weekend at Kansas,” said Busch. “They are great sponsors and we’re heading in there determined to make them proud of our effort in representing them.”